In the News: Mind-Controlled Robotic Arm Has Skill and Speed of Human Limb 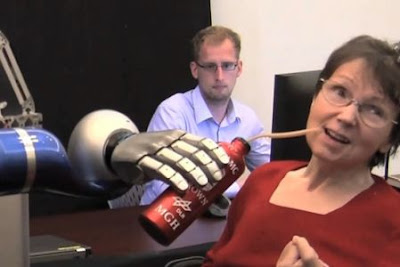 Reuters
Jan Scheuermann, 53, from Pittsburgh, was diagnosed with a degenerative brain disorder 13 years ago and is paralyzed from the neck down.

She was shown feeding herself string cheese and chocolate unaided as well as moving a series of objects in tests designed for recovering stroke victims, and she was able to do it with speeds comparable to the able-bodied.

Experts are calling it a remarkable step forward for prosthetics controlled directly by the brain. Other systems have already allowed paralyzed patients to type or write in freehand simply by thinking about the letters they want.

In the past month, researchers in Switzerland also used electrodes implanted directly on the retina to enable a blind patient to read.

The development of brain-machine interfaces is moving quickly and scientists predict the technology could eventually be used to bypass nerve damage and re-awaken a person's own paralyzed muscles.

In the meantime, they say, systems like the one developed by the U.S. researchers could be paired with robotic "exoskeletons" that allow paraplegics and quadriplegics to walk.
For Scheuermann, the experience has already been transforming.

"It's given her a renewed purpose," Michael Boninger, who worked on the study published in The Lancet, told Reuters. "On the first day that we had her move the arm, there was this amazing smile of joy. She could think about moving her wrist and something happened."

The research team from the University of Pittsburgh Medical Center implanted two microelectrode devices into the woman's left motor cortex, the part of the brain that initiates movement.

The medics used a real-time brain scanning technique called functional magnetic resonance imaging (fMRI) to find the exact part of the brain that lit up after the patient was asked to think about moving her now unresponsive arms.

The electrodes were connected to the robotic hand via a computer running a complex algorithm to translate the signals that mimics the way an unimpaired brain controls healthy limbs.

"These electrodes are remarkable devices in that they are very small," Boninger said. "You can't buy them in Radio Shack."

But Boninger said the way the algorithm operates is the main advance. Accurately translating brain signals has been one of the biggest challenges in mind-controlled prosthetics.

"There is no limit now to decoding human motion," he said. "It gets more complex when you work on parts like the hand, but I think that, once you can tap into desired motion in the brain, then how that motion is effected has a wide range of possibilities."

It took weeks of training for Scheuermann to master control of the hand, but she was able to move it after just two days, and over time she completed tasks - such as picking up objects, orientating them, and moving them to a target position - with a 91.6 percent success rate. Her speed increased with practice.

The researchers plan to incorporate wireless technology to remove the need for a wired connection between the patient's head and the prosthesis.

They also believe a sensory loop could be added that gives feedback to the brain, allowing the user to tell the difference between hot and cold, or smooth and rough surfaces.

Grégoire Courtine, at the Swiss Federal Institute of Technology in Lausanne, hailed the project. "This bioinspired brain-machine interface is a remarkable technological and biomedical achievement."

"Though plenty of challenges lie ahead, these sorts of systems are rapidly approaching the point of clinical fruition," Courtine, who was not involved in the study, said in a comment piece in the Lancet linked to the study.

Although using technology to restore movement, sight or hearing in the disabled would for many seem uncontroversial, some disability rights groups and ethicists are wary.

They argue that restoring hearing, for instance, could fuel a prejudice that a deaf life is less rich, or less well lived.

Andy Miah, a professor at the University of the West of Scotland who has written extensively about human enhancement in the context of the Paralympics, says it is far from straightforward.

"For instance, a few years ago, there was a case of a deaf lesbian couple who sought to use in vitro fertilization to select for deafness," he said.

"They argued that absence of hearing is precisely not an impairment, but allows access to a rich community."

The ethics become more complex with the prospect of using these technologies to enhance the able-bodied.

"It's quite likely that therapy is the back door to enhancement in these kinds of technological interventions," says Miah. "People will question whether this is desirable, but we already live in a society that tolerates such modifications.

"Laser eye surgery interventions have grown astronomically over the last decade and nobody complains that it is making people superhuman." 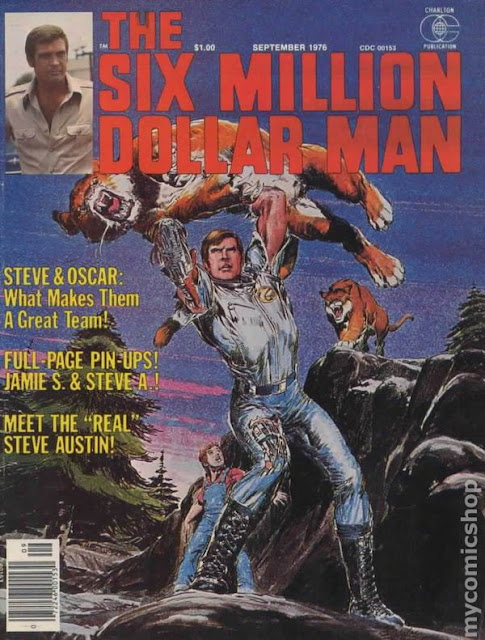