A Plea for Originality 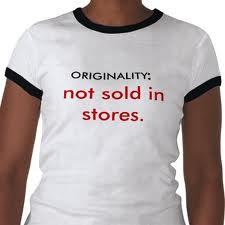 It seems more and more, we live in a world completely devoid of originality.

Take entertainment for instance--  most movies released today are either prequels, sequels or updates on films made a generation or two ago.

Its Hollywood's way of saying 'we're too lazy to come up with interesting, original concepts you the audience may reject, so we're going to give you safe and familiar'.  So that's why every film still has yawn-inducing martial arts, crazy special effects, endless car chases and a million bullets to shoot someone 3 ft away...

Everything but plot and characters.

In professional sports, notice how the 'hot' coaches to be potentially hired are often nothing more than worthless re-treads who've either failed to be successful in multiple opportunities elsewhere or coaches who haven't won the 'Big One' since the George W. Bush era, or farther back. 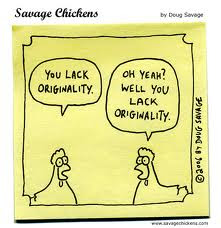 Sports owners are cowards-- very few have the courage to hire someone new with original ideas and philosophies. So instead, you end up with the same losers (professionally and/or personally) talked about every season for vacant coaching/managing positions.

And people-- they all dress the same (various degrees of sloppy and disheveled), talk the same ("like, you know..") and act the same (are the earbuds to the ipod shoved deep enough in your ears or face buried deep enough in the texting device to completely block out all humanity?)

A nation of followers.. one generation to the next

And the media is utterly devoid of originally-- they will think of every trick and scheme to alter how news is presented visually or how to develop the newest paywalls to prevent readers from perusing their generic AP & Reuters stories... 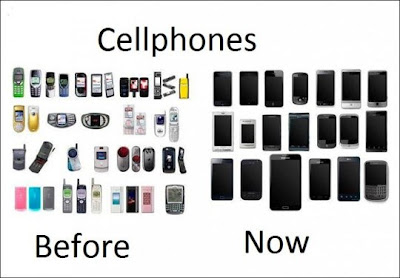 But actually present any points of view or 'Option C' or 'D' from the carefully constructed policy debates of the two political parties??  You're out of luck there...

Let's take this whole 'fiscal cliff' nonsense.. You have two parties each with a differing point of view.

The Republicans want not only to see no taxes raised upon them but would prefer it lowered by an additional 10-20% so that they pay what they did during Reagan's presidency and back in the 1920's when we were a Creditor nation, and could afford taxes that low.

And they want every social benefit slashed n' burnt' and sliced n' diced n' minced down to a pasty pulp any government expenditure that actually helps people's lives in any way or which others are dependent to survive.

Ironically, Republicans don't wish to see a penny cut from Defense.  That government department to them, needs to expand...

Then you have the Democrats that want to tax the wealthy and well to do, and really not cut anything unless they absolutely have to, with the exception of Defense...

While we side with the Democrats in this current battle of extreme either-or's, neither is realistic...  To combat debt and get finances in order, you have to Both increase one's revenue stream and make cuts to expenses.

Guess that idea is too original for politicians and the media to address and discuss in the public forum.  Either-Or is so much better...

If we ruled, this is what would occur--  The tax rate would increase on all Americans making more than $250k individually ($300k for a couple) and culminate with 60% tax rate on those making $5million/yr or more.

We actually would Decrease the tax rate for those making 20k or less, from 10% to 6% so poor and working people could keep more of their $$ for basic survival.

We would also dramatically increase stock dividend taxes for those who've made over $100k/yr simply on investing whether it be stocks,bonds, commodities..   In addition, we'd establish a tariff to curb and punish daytrading-- a penalty if an investment of $5k or more was sold within 12 hours of when was bought..

Then in terms of Government cuts, we would cut from Defense and all other areas of systematic waste but not touch Social Security or Medicare since both are solvent and will be for a few decades to come.. let that be a battle for another day...

This way the Government would be increasing their tax revenue while making needed cuts to trim off the excess fat without harming the vast majority of the populous...  And if employment supposedly stalled because of it, well... to paraphrase something FDR said in the early 1930s, the private sector will need to step back and get out of the way as the government steps in to become job creator.

Now the so-called 'experts' expect a compromise where both parties concede their core-convictions and practice the art of mutual Appeasement for the benefit and pleasure of Wall Street.  Thus, some cuts and some tax increase... etc.. and the Dow can go higher n higher as the 99% crumbles to ash

But if that happens- an agreement without severe tax increases and stringent expenditure cuts in non-essential components of government, then the 'fiscal cliff' agreement will be nothing more than a farce; another exercise in subtle can kicking that allows everyone to feel both victorious and pissed, and which allows Wall St to get away with not being deservedly punished once more..
Posted by dsasR at 2:18 PM