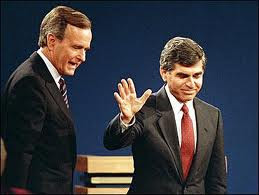 In a little more than four months, people (who can motivate themselves to do so) will be voting in the 2012 Presidential election.  And while every election always seems to bring out the same emotions in people-- stale candidates, tired talking points, both owned by Wall St, etc.., elections are actually quite special & unique.

It is really the only time a President, or candidate to become President, will even pretend to care what an everyday person thinks or feels.  Its pretty much the only time you ever see Elites bother to do everyday activities with the common folk like play horseshoes or order a slice of pecan pie at the local diner.

The best part about a Presidential election is its really the only opportunity to see politicians flustered or irritated and yet can't scurry out the back door or hide. This usually takes place during debates.

They have to stand there at the podium and take the political jabs and the more they fight back, the more people can see politicians for what they are... desperate base animals dressed in expensive suits. 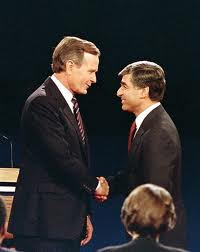 Bush: "I'm going to crush you into dust, shorty"
Dukakis: "Just try it, you wimp"

Speaking of debates, for "fun" and mere curiosity one night while perusing through YouTube,  yours truly watched a Presidential debate from September, 1988 between George H.W. Bush and Michael Dukakis who was Governor of Massachusetts at the time.

As all debates go, it was rather a lengthy, long winded affair but we thought it would be interesting to touch on some highlights of that debate to show just how much times have changed in 24 years and yet in some ways, nothing's changed at all.

Because this was a 90min debate, we will keep this as brief and to-the-point as relates to the present, as we possibly can.

For some historical perspective, we remind the reader that in 1988, we had yet to invade Iraq.  Saddam Hussein would not invade Kuwait, which triggered the US intervention, until August 1990.  In addition, there still was in existence the Soviet Union and the Berlin Wall. 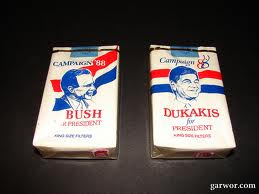 ~ Which pack of cigarettes will you be smoking to show your support?

*  The 1988 debate began with the moderator asking a question: "The polls say the #1 issue concerning Americans domestically is drugs..."   Wow.. Drugs.   Wouldn't it be so nice if that was our #1 worry today?

Bush who was VP at the time, talked about the deterioration of values, the need for harsher criminal penalties and how the President needed to lead the Drug War by example...  Good thing he didn't know his son, W was heavily drinking, smoking pot and doing coke at this time or Bush Sr. would have felt quite silly saying what he did..

*  Afterwards, there's a back-n-forth between Dukakis and Bush about Panama's leader at the time Manuel Noriega. Bush seems irritated as he speaks.  The specific points-counterpoints aren't important but when Bush becomes President,  US forces invade Panama in 1989, forcibly removed Noriega and then arrested him.

* The next topic for debate is taxes and balancing budgets to try to lower the deficit.    Bush proposed lowering income taxes to spur job growth.  Dukakis said the tax cuts only benefits the top 1%.   He also wanted to cut back on defense spending while Bush stated the importance of a ready military and blames Congress for excessive spending.

24 years later and there's no evolution of political thought. 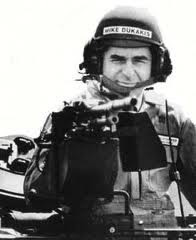 Bush also reiterated a promise he would make repeatedly during the '88 Campaign.. under his Presidency there would be "No New Taxes!"    He would backtrack on that pledge in 1991, blame it on Democrats 'backing him into a corner', and it would be the death knell of his election for a 2nd term in 1992.

*  The next topic concerns medical coverage... the questioner states 31 million Americans (in 1988) have no health coverage.   Bush started by saying "One thing I will not do is sock businesses..."

The two candidates give their talking points then the discussion switches to AIDS and funding for AZT which treats the disease.  You certainly don't hear any politician of either party ever talk about AIDS or finding a cure today.    Guess containment seems to be good enough.

* As the debate goes on, a question is posed to Bush as to why he keeps referring to Dukakis' affiliation the ACLU as "a card carrying member of..." . 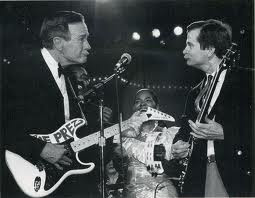 ~ BTW, before we continue, we want to be clear that we are not attacking Bush because we agreed with Dukakis' positions or wish he had been elected President in 1988.   Its simply that Dukakis' political views really don't matter.   He didn't win so his thoughts and opinions never became public policy or affected anyone; they are irrelevant.

*  The debate moves to housing.  Dukakis wanted to provide more dwellings for people who are the poorest to live in.  Bush wanted to push more home ownership and much lower interest rates.   This would also be a guiding policy of Fed Chair Alan Greenspan who served during Reagan, Bush Sr. and Clinton's administrations.

At this point we'll stop the specific debate analysis...  After all it is 2012, not 1988 and many of the topics debated like abortion, death penalty, education, responsibilities of Fed Govt vs private sector are quite honestly, very stale and the same talking points Dems & Reps utter today.

The point of all this was to give little glimpses back at a time that was full of problems which seem so trivial and in some ways, welcomed today compared with the issues we're dealing with.

The economy and unemployment was a mere afterthought.  It was so unimportant an issue to voters that the debate moderator didn't even ask a question until 50 minutes into the 90 min debate.

We also were not involved in any wars, sending US men and women thousands of miles away to be put in harms' way daily for convoluted causes with undefined objectives.  The worst we did back then was aid Nicaraguan Contras with money and weapons 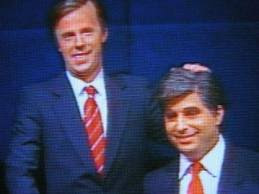 And Europe was not a real thought in any American's mind unless it was planning out an exciting family vacation destination.  All the political and economic plate-shifting caused by the fall of Soviet Union would not occur until a year later.. 1989.

We wonder 24 years from now, when any bored souls take the time to watch the 2012 Presidential debates, will they see 2012 as our true bottom point; a time where things would not get worse, and thus began a progressive, steady climb to national and global happiness and prosperity?