Panic of 1907 i.e Why Fed Reserve was created 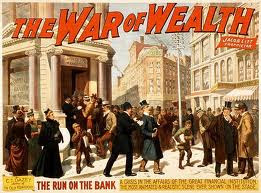 Today is one of those days in markets and finance, where by this evening you will have forgotten anything you may have read here and elsewhere on the day's activities.  Its that insignificant.

And since we at A&G, unlike mainstream media who are paid propogandists and thus must write something to fill that newspaper space between the ads (that's why most news is called 'filler'), we don't have to do this...

So as we go into another weekend, we're going to repost from last September a history lesson of the specific financial crisis or 'Panic' which triggered the supposed 'need' and creation of the Federal Reserve.

We're asked many questions often by many people concerning the Federal Reserve.  Why was it created?  Why is it so powerful?  Why is it so evil? etc...   The first question can be answered in the posting below which addressed the Panic of 1907 which was the precursor for the creation of the Fed.   As to the other questions asked, we will have to answer them more specifically in future posts.


The best way to read this post is not to get bogged down in every little detail provided but to focus on a bigger picture- what was once the "backstop" if the markets collapsed actually became the cause of it, and the nation was very close to total economic collapse.  Also focus on the similarities between now and then.

This is the last of a 4 part series on the US history of Panics or depressions prior to the Great Depression '..   The other parts can be found below:

This also known as the 1907 Bankers' Panic when the New York Stock Exchange fell close to 50% from its peak the previous year. There were numerous runs on banks and trust (commercial bank) companies.  The panic eventually spread throughout the nation when many state and local banks and businesses entered into bankruptcy.

Primary causes of the run include a retraction of  market liquidity by a number of NYC banks and a loss of confidence among depositors, exacerbated by unregulated side bets at something called bucket shops (These specialized in stocks and commodity futures- bucket shops typically catered to customers who traded on thin margins.

Most bucket shops refused to make margin calls, so that if the stock price fell even momentarily to the limit of the client's margin, the client would lose his entire investment.) 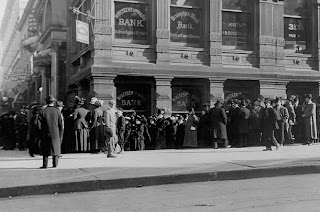 The crisis was triggered by the failed attempt in October 1907 to corner the market on stock of the United Copper Company.  When this bid failed, banks that had lent money to the cornering scheme suffered runs that later spread to affiliated banks and trusts, leading a week later to the downfall of the Knickerbocker Trust Co.—New York City's third-largest trust.

The collapse of the Knickerbocker spread fear throughout the city's trusts as regional banks withdrew reserves  from New York City banks. Panic extended across the nation as vast numbers of people withdrew deposits from their regional banks.

The panic may have deepened if not for the intervention of financier J.P. Morgan, who pledged large sums of his own money, and convinced other New York bankers to do the same, to shore up the banking system.

At the time, the United States did not have a central bank (the current Federal Reserve) to inject liquidity back into the market.  Despite the infusion of cash, the banks of New York were reluctant to make the short-term loans they typically provided to facilitate daily stock trades.

Unable to obtain these funds, prices on the exchange began to crash on Thursday October 31.   Morgan summoned the presidents of the city's banks to his officeand  informed them that as many as 50 stock exchange houses would fail unless $25 million was raised in 10 minutes. And 10-15 minutes later, 14 bank presidents pledged $23.6 million to keep the stock exchange afloat. 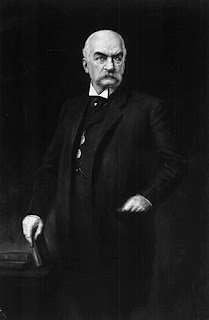 Although calm was largely restored in New York by Saturday, November 2, yet another crisis loomed. One of the exchange's largest brokerage firms, Moore & Schley, was heavily in debt and in danger of collapse. The firm had borrowed heavily, using stock from the Tennessee Coal, Iron and Railroad Company  (TC&I) as collateral.

With the value of the thinly-traded stock under pressure, many banks would likely call the loans of Moore & Schley on Monday and force an en masse liquidation of the stock.  If that occurred it would send shares of TC&I plummeting, devastating Moore and Schley and causing a further panic in the market.

In order to prevent the collapse of Moore & Schley, Morgan called an emergency conference at his library Saturday morning. A proposal was made that the US Steel Corp., a company Morgan had helped form through the merger of the steel companies of Andrew Carnegie and Elbert Gary, would acquire TC&I. This would effectively save Moore & Schley and avert the crisis. 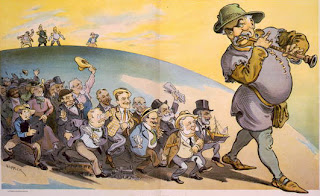 ~ JP Morgan as the Pied Piper

By then, J.P. Morgan was drawn into another situation. There was a major concern that the Trust Company of America and the Lincoln Trust could fail to open on Monday due to continuing runs.

On Saturday evening 40–50 bankers had gathered at the library to discuss the crisis, with the clearing-house bank presidents in the East room and the trust company executives in the West room.  Morgan then entered the talks and told the trust companies that they must provide a loan of $25 million to save the weaker institutions.

On Sunday afternoon it was worked out to  finalize the deal for U.S. Steel to buy TC&I and by Sunday night had a plan for acquisition. But, one obstacle remained: the anti-trust crusading President  Theodore Roosevelt who had made breaking up monopolies a focus of his presidency.


Roosevelt was implored to set aside the principles of the Sherman Antitrust Act and allow—before the market opened—a company that already had a 60% market share to make a massive acquisition. Roosevelt caved on his principles, relented, and allowed the merger to occur.  The final crisis of the panic had been averted. 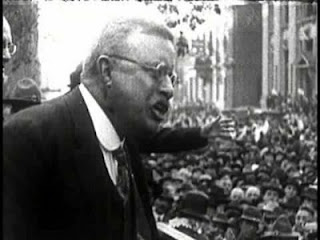 The frequency of crises and the severity of the 1907 panic added to concern about the outsized role of J.P. Morgan which led to renewed impetus toward a national debate on reform.   Eventually in 1912, the Federal Reserve was born and would replace the 'trusts'.

In summary, we have a long history of protecting banks, investors, commerce and Wall St.  And because of this loyalty and determination to protect these entities at all times, this nation has had over a dozen Panics, recessions, depressions and Great Depressions in our history.

And it will continue- indefinitely- as long as these interests are protected at All costs over the needs & concerns of the 99%.
Posted by dsasR at 12:05 PM