In the previous 2 postings, we showed you who exactly owns the New York Times and the Washington Post.

In brief summary, all corporate media is owned by investors i.e. shareholders. That is the corporation's sole fiduciary.. they are the Only ones that ever matter.  And who are the shareholders?  Banks, hedge funds, investment firms and other power-entities in the world of finance.

We're going to focus on one other media entity then move on to other topics in the future.  Today, we're going to look at Gannett Media.

In case you're not familiar with them, they own USA Today and local newspapers & TV stations in 37 US states including the Detroit Free Press, Indianapolis Star and Cincinnati Inquirer

So who are Gannett's biggest investors?  If you read the previous two postings, you'll find some recognizable names... 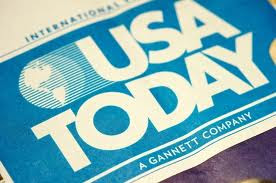 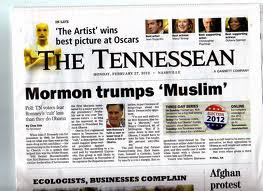 ~ The Tennessean: one of many Gannett owned media

Sorry to belabor a point, but This is why the media does such a piss-poor job of truly informing people as to what's going on in the US economy, why the lie 'recovery' is pushed so hard, and why tens of millions of people are utterly brainwashed daily into believing the financial sector is good, with its success meaning America's success...

Bad choices all around.

All media have agenda.. ALL.  And rather than one wealthy magnate influencing and molding popular opinion like William Randolph Hearst in the early-mid 20th century and to a lesser extent, Rupert Murdoch today,  agenda is now molded by the stockholders.

Just like a politician is likely to push laws onto the books that represent his/her biggest campaign donors, newspapers will push ideologies that are the most friendly and agreeable to their shareholders.

If you agree that the financial sector is full of noble, patrotic people, that Wall St needs to keep going up, up, up, that the US is in recovery and that everyone has a god-given right to make as much $$ as humanly possible even if they're in their 80s or 90s, then pick up a newspaper tomorrow, find a comfy-cozy spot to sit, and Enjoy~

If you want truth and reality, you will seek it out on the internet via reputable sources and of course, keep reading here.  At 'A&G' we don't want your money-- we just want you awake.
Posted by dsasR at 6:08 PM