Oh, Whatever to do when a real leader emerges... 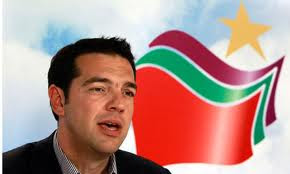 ~ Alexis Tsipras- the 37yr old who may lead Greece out of their muck...

Another day in the financial jungle...

A lot of grumbling, rumbling and rumor..

Most of the headlines of today are insignificant because at this stage in the game of how to keep the EU from completely crumbling, only facts and actualities matter; everything else is newspaper filler between the adverts.

There is one exception- when rumor is based on something that may or may not occur in the very near term, and that information, even if it ends up hot air must be discussed.. and thus..

On the Dow Jones webpage today was this headline- "Euro Zone Debating Delay of Eur. 5.2B May 10th Payment to Greece".

It seems some governments are concerned about giving Greece money amid their political turmoil which is a professional way of saying, "No fucking way in Hell do I want my money going to some small shit nation in the Adriatic who's going to turn around in a couple weeks and sabotage my carefully laid plans!" Harsh we know, but trust us, this is the current feeling among some in the EU.  Political-speak and finance-speak are two distinct languages all their own, full of deeper truths and subtleties than the words spoken.  For instance, every time a politician running for office refers to his/her competition as "My opponent..", that's code for "This bastard/bitch who's trying to take power from me.."

If there's one aspect of this whole Euro-mess you need to understand and remember, its that the Greek bailout is not about Greece: it is merely to allow Europe to bailout its banks via ECB and Troika funded interest payments and using Greece as a passthru vehicle.

In the US, the Fed does the very same tactic except since we're both a fiscal and political union, composed of 50 united states under one centralized Federal control, the Fed doesn't need to, say, funnel $$ to Goldman Sachs or Bank America by giving it to Georgia or Utah.  Instead, the Fed funnels via the stock market.

In Europe, the European Union was created in 1991 as a fiscal union but not a political one.  This means supposedly one nation was not supposed to control all the others, nor for a centralized body to dictate their will to the member states.

That's a big part of why the EU is in such trouble. 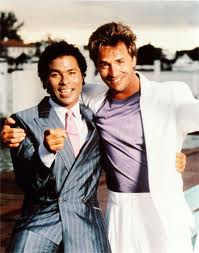 So back to Greece.. to understand the position they put themselves in, simply think on the plot lines of numerous cheesy TV cop shows over the years:

Plotline: A smart-ass gets in way over their head by interacting with forces bigger than them (the Mob or a drug cartel).. Smart-ass in heavy debt; owes a lot of $$- now  forced provide favors for baddies (perhaps stash cash or allow home to be a drop off point, etc..) ..  Former smart-ass now victim, finds oneself in a worse n' worse predicament with no way of getting out...

Who to turn to?

Unlike TV, there's no "A-Team" or "Miami Vice" Crockett & Tubbs to crash in and save the day.  If Greece is to ever save itself, it has to do it alone.. from within.   And even when forces within the nation wish to assist in its destruction i.e. the continuance of austerity and aiding & abetting the baddies with the (in this  case, not so stereotypical) German accents, salvation will only come from Greece itself.

There are many heroes and freedom fighters in Greece-- they're the ones that took to the streets to protest and who risked life & limb to confront the Grecian thug police as teargas canisters and batons were aimed upon their faces.  These names no one will ever know.

One name people may soon need to know is Alexis Tsipras, leader of the Greek political party Syriza.  He has vowed to tear up the hated Memorandum, as the EU-IMF "troika" loan package is known, and has bravely & often stated this goal.

In the past no one in a position of power or prominence cared what he thought on anything.  Now that Tsipras may actually be in a position to make his goals reality, the establishment are tinkling in their underpants (and panties) in fear. 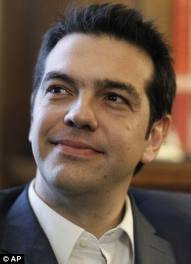 See Tsipras understand the full picture.  He really does.  Its almost as if he's read 'A&G' for the last few years and has taken our position on the EU and our strategy for dealing with them word for word .  Of course he hasn't but certainly feels like it.

We've advocated Greece using their 'nothing left to lose' position as one of strength and defiance, not weakness; to say to the EU, "Look, renegotiate terms with us and allow us to get out of our debt quicksand so we may survive, or we will leave the EU immediately and take everyone down with us"

Here's how the Telegraph UK put it:

"(Tsipras' position is) "The popular verdict clearly renders the bailout null and void," he said.  To those who warn that such defiance means an unstoppable lurch towards full default, a banking crash and EMU expulsion, he retorts that Greece has the "ultimate weapon". It can bring down the whole European system if EU leaders refuse to soften the terms...


This bluff may be called. "Patience among the creditor countries is running out," said Blanka Kolenikova from IHS Global Insight. Germany's media says finance minister Wolfgang Schauble is itching to force Greece out of the euro as a salutary example, sure that Europe is strong enough to withstand the shock. This, in turn, is an illusion waiting to be punctured.

Arnaud Mares from Morgan Stanley said a Greek exit would set off "massive deposit flight" from all the vulnerable EMU states. "It could unravel the single currency altogether."" 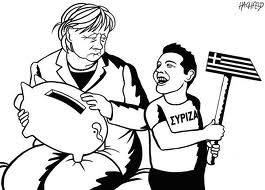 And see that's it in a nutshell.  Once the rest of Europe can put up enough of a firewall to ensure their banks and financial interests are as protected as possible, they will not hesitate to cut Greece off at the knees, then cut off the nation's head.

Another way to think of it is of soldiers holding back killing civilians until they are done digging the mass grave they are expected to eventually crawl down into.

So if Greece is to 'die' no matter, then it would be expected they kick into survival mode and threaten to take everyone with them.  The Telegraph UK calls it 'bluff' but bluffs only occur when the threat is not serious.

Now for the first time in a long time, it is.  In all likelihood there will be the need for new elections in June and Tsipras'  Syriza could have a true majority by then and thus sweep him into office.  Thus the power and finance elite being scared shitless and  the threat of withholding billions already promised and agreed upon a couple months ago.

And since everything in this global financial world is interconnected, you can kinda sorta see why Greece matters.. and how bad they've been kicked and stomped upon financially by their captors to even think to resort to this tactic. 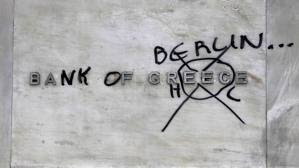 _________________________________________________________
Quick 6pm est followup..  Tsipras unfortunately was not able to organize a coalition, which means ultimately new elections will be held in June.  The good news is that his party does have strong support amongst voters and if the populace blame others for the impasse, he'll eventually be the next leader of Greece meaning the markets will pardon our french, shit a brick!  ~grins
Also the European banker elite decided it was in their own best interest to release 4.2 Billion Euros of the 5.2B promised..  The remainder will be released in June contingent upon elections which is finance speak for  "We better damn well get the election result we want this next time or else!"
Expect a wild ride folks..
Posted by dsasR at 11:57 AM