On this day in history, May 22nd, many many interesting little trivia tidbits occurred such as the Wright Brothers gaining a patent for their "flying machine" in 1906 and baseball legend Ted Williams enlisting in the military in 1942.

One event in particular back in 1856 strikes us as most fascinating and relevant to the present; an event few people have heard about:

On this date in 1856, Congressman Preston Brooks of South Carolina severely beat Senator Charles Sumner with a metal-tipped cane on the floor of the United States Senate.

"Brooks' attack, assisted by fellow Southerner Rep Laurence Keitt, was delivered as revenge (or "punishment", in Brooks' words) in response to a virulent abolitionist speech by Sumner in which he mocked Brooks' relative, South Carolina Senator Andrew Butler, and likened Southern slaveholders to pimps.

"Sumner, who was known for his scathing abolitionist speeches, was severely injured by the attack, suffering head trauma that would cause him chronic pain and symptoms consistent with what would now be called traumatic brain injury and post-traumatic stress disorder, and spent three years convalescing before returning to his Senate seat.

"Brooks and Keitt were not prosecuted or censured for the attack, and both were overwhelmingly re-elected by their South Carolina constituents.  Brooks' act and the polarizing national reaction to it to are frequently cited as a major factor in the acceleration of tensions leading up to the US Civil War." 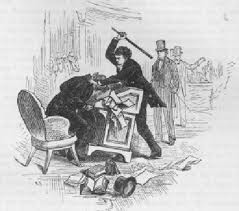 Polarized is the right word.  In the north, Brooks was vilified.  In the south, supporters sent him replacement canes as gifts.

But that's that rhetoric does.. it inflames passions..  Heightens the anger..  Turns rational thought into irrational action.

Sometimes one needs to watch what they say around others, no matter the conviction of belief.  Because not all will respond with a furrowed brow or empty banter.

And this makes us think about Europe.. all the nonstop rhetoric about Greece and their June elections-- the "My way or the highway" themed threats and pronouncements by Germany, the ECB and others...  the Bluster and Bravado that if Greece leaves, the EU will do just fine while fear-mongering that Greece will turn into a cesspool of anarchistic violence.

Nothing constructive comes from the rhetoric.  And you best believe there's many a Greek or Spaniard or Italian that would love to take a cane to the heads of many of the political leaders and financiers seeking to shove cold, harsh austerity down their throats. 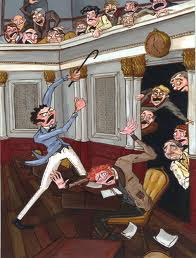 Sometimes rhetoric can be hyperbolic like in the case of Charles Sumner.  Other times the rhetoric can appear innocent and benign like the G8 making empty promises of less austerity & more growth or the promise from the EU that Greece will stay in the Eurozone at all costs.

When the words ring hollow and end up untrue, the repercussions are a greater maddened populace feeling betrayed and manipulated by the pronouncements than had the leaders and bankers simply kept their worthless mouths shut.

Then again, their audience isn't the Latin Bloc of Europe.. its Investors.   Yes, there's that "I" word again.. vile, soulless, greedy, money-hungry Investors.  They want two things-- profit and certainty.  The world caters to those demands.

So that's where things are at today May 22nd.. the market blips up because it can't go down forever without some days of Investors buying on the dip.  Meanwhile Europe's leaders are nervous and will say or do anything to calm the markets to their masters, the Investors are placated.  And its a continual countdown to mid June

Expect the rhetoric in Europe to intensify... as will the repercussions
Posted by dsasR at 12:30 AM