Behind the civil pleasantries of "How may I help you?" and "Thankyou, please come again", there is a secret and unacknowledged War between the merchant and the customer.
The business does not wish to discount its product or service one penny lower then it absolutely Must to make the sale and if it could get away with it, sell that item or service at 100x the true cost.  The customer (including even the stupid one- the type who pays $3 for soda at sporting events, etc.) ultimately want to pay the lowest price humanly possible and if he/she could get something for pennies, they would.
So there's an on-going War.  The business truly hates the customer for forcing it to keep prices low and absorbing higher costs, and the customer hates the business for having the audacity to continually raise prices, especially when the overall economy is floundering and individuals are getting nipped at all ends.
Now, for a current example of this War--  Netflix.
A couple months ago Netflix decided it was going to raise its prices.  No biggie- everyone does eventually.  But the thing is, Netflix decided it would raise its prices by A LOT-   What cost $10 a month — online streams of movies plus one DVD by mail at a time — would now cost $16 a month. What used to cost $120/yr would now cost $192 - a yearly increase of $72. The company implied the reasoning was the high costs of mailing physical DVDs, but it also admitted that many people still wanted the physical discs.
In other words, if people want something, we at Netflix are going to make as much profit as possible off that Want.
Netflix, a few weeks later came up with a "brilliant" idea to alienate its loyal base even further-  split the DVD rental and streamline company into two separate companies, with the DVD rental unit called Qwikster.
The the two actions angered a lot of loyal customers-- enough that many chose to leave Netflix on principle.  Of course Netflix didn't care- they assumed they'd anger some and lose a lot of initial business but eventually people would come back, but the expanded profit margins were too enticing to ignore and shareholders would be pleased.  If they retained a million customers, that would be a yearly influx of $72 million more profit than based on old price points. 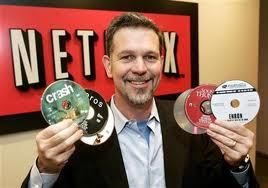 ~ Netflix CEO Reed Hastings
That's the key-- Netflix like all corporations don't give a damn about its customers- to them, we are nuisances and irritants. Corporations bow down to the will of its shareholders, much like nations including the US bow down to the will of investors.
According to Reuters on 7/25/11: "Since the change was announced in July, any subscription cancellations won’t show up until Netflix reports third-quarter financials sometime in October."  In other words, Netflix would have no clear idea of the damage they caused, and how investors and shareholders would react to it, until October.
What do you know...  its October now.  And what happened today:  Netflix admitted that it had moved too fast.  ""We underestimated the appeal of the single web site and a single service," Steve Swasey, a Netflix spokesman, said in a telephone interview. He quickly added: "We greatly underestimated it.""  (AP)
Notice the wording-  Netflix doesn't feel it was wrong to split the company in two- they just moved too fast in doing it.  And there was zero mention of the 60% price hike for their services- Netflix still thinks that's a winning move on their part.
Wonder what could have been been the catalyst for such an embarrassing turnaround?  Perhaps Netflix' stock itself.   On July 11th, one share of Netflix stock was $290.74.    As of 3p today October 10th as this is written, the stock's value is under $114.  That is a 3 month plunge in value of 61% or $176 per share.
Imagine you owning $10,000 in Netflix shares in early July and now they're worth just under $4,000- would you be pleased? 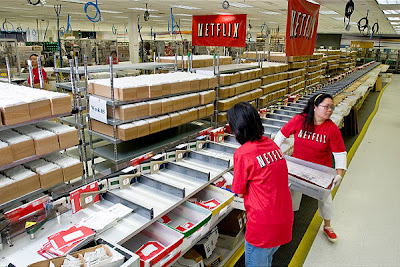 So what lessons are to be learned?
1) Businesses will squeeze every penny they can out of their customers and in the case of corporations, only pull back if shareholders aren't pleased.
2)  As a consumer, one should Never EVER feel any brand loyalty to any company, especially when the company feels no loyalty toward you.
3)  While Netflix lost a lot of good will from its customer base over this, they are not isolated.  All corporations work this way.
Businesses and customers are always at war- Always.  Business want to manipulate and control consumers' shopping behaviors so they are not conditioned to look for or expect real bargains.  And professional shoppers know the best way to force a business into weakening is to hold fast and not buy until the merchant marks down the price.
Those customers with patience and fortitude- they usually win
Posted by dsasR at 12:26 PM