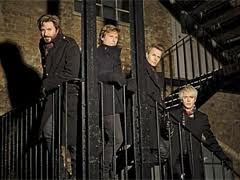 Its Sunday so you'll have to indulge me the occasional semi-silly posting.

I discovered this article about my favorite music group, Duran Duran on the Christian Science Monitor website relating to how dedicated some of their fans are and how much they will spend to see the group perform live.  The full article can be read by clicking the link below:


"Duran Duran, the 1980s British pop band, often say they are “the band designed to make you party.” Die-hard Duranies, as the band’s fans are known, will go to extreme lengths to party like a rock star.

While Duran Duran is currently touring North America, Duranies are spending thousands of dollars on concert tickets, travel, haircuts, cameras, and clothes to see their '80s teen idols. Give it to Duranies: They are fueling at least a part of a dismal economy...

Maya Grigoraia traveled to San Francisco from Chicago to see the band perform in Saratoga last month. She connected with other Duranies from around the country who she had met through social media channels over the last several months...  “I am spending money on travel to two out of three concert venues, as well as getting haircuts, manicures, and new clothes every few weeks so I am definitely making my contribution to the economy,” Grigoraria says. “It’s my patriotic duty to attend as many Duran Duran shows as possible.”...

Laura Harms of Taylor, Texas, has spent close to $2,000, including travel to a concert in Las Vegas in late September and to Dallas last week. Earlier this year, when Duran Duran swung through the United States, Ms. Harms traveled to Oklahoma to see the band.""

~  See, perhaps that's all it takes to uplift the economy from its recession-depression doldrums--More people jetsetting across the country to see Duran Duran perform.
Posted by dsasR at 8:58 PM