Be back Wednesday evening 10-26 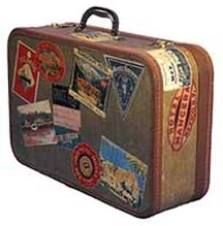 Ahh.. More business.. more travel..  So tiring but on rare occasion its necessary.

This posting is a little different that normal in that the focus isn't so much on economics and finance as is it the military and the US history of being at war.

I was watching a documentary last night on the Vietnam War made in 1972 where servicemen stationed at various military bases who had been deployed previously and returned, and those about to be sent off, were speaking honestly about the conflict.  Many spoke of feeling that Vietnam was not a 'moral and just' war.

And that got me thinking.. In the entire history of the US military from Revolutionary War until the present conflicts, how many wars have we truly fought that were 'moral and just'? Or was the situation in Vietnam something new?  So I decided to break down each war the US has been involved in militarily to see if it can fit as 'moral and just'.  No judgments are made on those who serve or have served.  This exercise was meant to look at government's decision making processes and rationales. 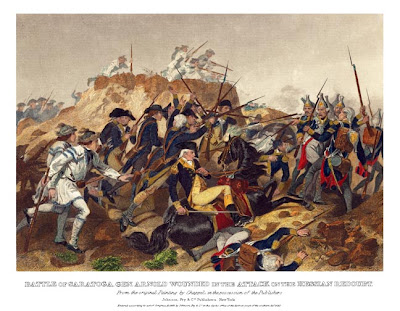 Revolutionary War (1775-1781) -  Obviously Americans feel it was a moral and just war because it brought about independence and a new nation.  But let's get beyond that Civics 101 nonsense- What provoked the war to take place?  Merchants in New England did not want to pay increased taxes by the British govt' to fund a past war (French & Indian War) that city-dwelling colonists did not get any direct benefit from.

So the masses were riled up into a lather by cheap merchants, and from Boston Tea Party to Boston  'Massacre', the rebellion drum was beaten harder and harder until eventually shots were fired. And if the colonists' cause was so just and moral, why was it that the British offered full freedom to any black man who took up arms to help crush the rebellion?  Wouldn't emancipation have been something we ourselves would offer since we were supposedly fighting for it?

Much more I could write but for brevity sake, I won't... 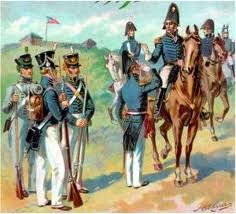 War of 1812 (1812-1814)-  This was the second fight with the British and our 2nd economic fight.  This was a war over free trade, control of the seas, impressement  (opposing nations coming on board and taking sailors to commandeer to serve as sailor in that nation's fleet).  The war essentially ended in a draw though the Battle of New Orleans was fought months after the Treaty of Ghent had officially ended the war in 1814. The Battle was a rout, a great achievement by General (and future President) Andrew Jackson.  Nonetheless, the conflict was not a 'moral and just' one. 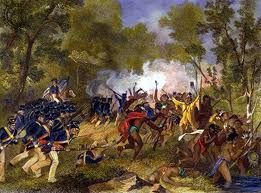 Indian Wars (1810s- 1840s)- There were many small wars between US military and the Native American population during this period. Collectively, the goal was to push the various tribes west from the Appalacians, Ohio Valley and still recently new Louisiana Purchase territory.  Some US successes, some failures but nothing moral about the "Trail of Tears", Seminole Wars and other military actions around this time. 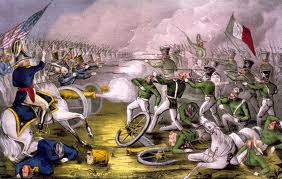 Mexican War (1846-1848)-  Some will say the war was fought to liberate Texas and make it a US state. The US was also big on a concept called 'manifest destiny' which is a way of saying it is the US' destiny to expand its empire as far as eye could see and westward to the Pacific.  The US won and acquired a lot of land- future states of TX, OK, NM, AZ, CA, CO and NV.  The war was a great success for America; just not a moral and just one. 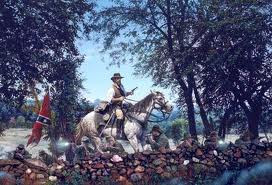 US Civil War (1861-1865)- Now at this point you're going 'Aha!' But let's really understand what happened and not what your history teacher/asst. football coach taught you in HS.   The Civil War was not fought over slavery in terms of human bondage, rather the economics of the institution.   Slavery meant free labor which undercut northern businesses. They used mostly immigrant labor who were treated to horrible working conditions by northern owners.  But they still received a wage and that meant greater profits for Southerners who paid none. In addition, Southern cotton was exported across the Atlantic to Liverpool England to be milled because it was more economically cost-effective than to send the cotton to northern mills. Many Northern industrialists wanted to stop this practice.

By the time the war began in April, 1861, the fight had nothing to do with slavery on a human level and the Union had zero concerns on the institution or curtailing it.  To paraphrase Lincoln, if he could unite the Union by freeing some of the slaves in some of the states or all of them or none of them, the focus was preserving one nation.  The Emancipation Proclamation came about in early-mid 1862 as a means to motivate Union soldiers to re-enlist at years' end by making the war a 'moral' one.  It turned out to be good propaganda because the ruse worked nd re-enlistment soared by New Years, 1863 even though Lincoln held off releasing it for months until there was a Union victory as not to appear 'weak' and it only freed slaves in states it had no jurisdiction--the Confederacy itself.  Border states that aligned with the Union were allowed to keep slavery. 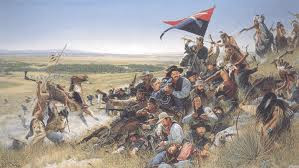 Indian Wars (1860's- 1890's)-  A continuation of first series of Native American wars upon various tribes. Some American setback, some victories and ultimately pushed millions of people into territories then 'Americanized' them by giving them Christian names and clothing to attempt to take away all sense of heritage identity and pride.  All this done so railroads could expand and connect to California. 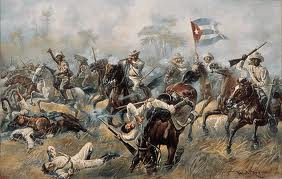 Spanish American War (1898)- Not much moral about it.. we wanted ownership of Cuba and Philippines so the US provoked armed conflict by rigging an explosion upon the USS Maine (Remember the Maine!) and blaming it on Spanish provocateurs.  The conflict ended rather quickly. 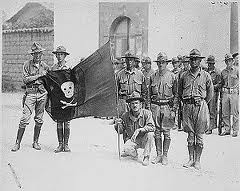 Military involvement in Central & South America (early 1900s)- Marines sent to numerous places (Haiti, Nicaragua, etc) to occupy various nations while assisting US business interests in gaining a foothold in this part of the world. 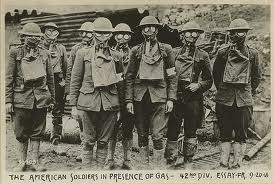 World War I (1914-1918)- US involvement was only the last 9 months of the war even though official declaration was in 1917.  Most believe we declared war on Germany because of the sinking of the Lusitania and/or the Zimmerman Telegram where Germany's Ambassador to Mexico promised them they would be given back territory lost during the Mexican War if they opened a military front on the Mexican-US border.

Both incidents were part of the overall reason but in 1917 the war was going badly for the Triple Entente (Britain, France & Russia)  When the Russian people rose up and overthrew Czar Nicholas II, that took Russia out of the war.  And had Germany won, American investors who had heavily backed England would have taken a Severe financial beating.  So they pressured Woodrow Wilson to eventually enter a war he had spent years promising he wouldn't involve the US military in.  WWI was not a moral and just war and neither was US' involvement.  After the war, Wilson tried to push through his highly idealistic and naive 14 Points, but neither Europeans or the opposition party at home wanted anything to do with it. 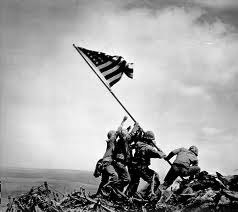 World War II (1939-1945)-  Ok.. This is The Moral War if there ever was one, right? Obviously when you look at the number of lives lost and in particular the millions of innocents exterminated for their religion, ethnicity or outright hate.  But its important to look with objectivity too.  The war began in September, 1939.  It took 27 months for the US to enter.  And what provoked US involvement- some horrific act the Nazis perpetrated upon innocents?  No, it was an attack by Japan.  In fact, in 1940 the US govt sent many boats full of emigres and those escaping persecution from Germany BACK to Germany, the "Spirit of St. Louis" being a famous example (not specifically Charles Lindbergh's plane)

The war ended by dropping 2 nuclear bombs on Japan.  I am not saying it was wrong since many experts on WWII argue had that action not occurred, it would have taken a million US soldiers invading Japan and many more years of fighting to truly end the war.   So one can not discard elements of necessity.  But a moral and just war, by definition does not end with the destruction that 2 atom bombs create.  Nonetheless, this war was the closest the US has come to fighting a truly moral and just war, especially considering the monsterous enemy which was defeated, particularly in Europe. 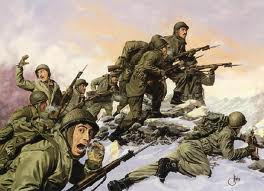 Cold War (1945-1990)- For time constraints, I incorporated Korean War (1950-53), Vietnam (1964-75) and every other military action we took to try to stop the spread of Communism as the argument went.  If you truly believe communism is an insidious evil, then you believe all the armed conflicts of the period were necessary to protect freedom and democracy.  If you feel that the 'domino theory' and fear of communism spreading and infecting like a virus is a bunch of BS, then you don't look at any part of this period as being moral or just. 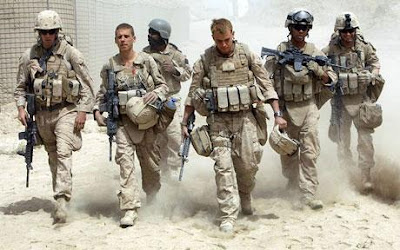 Modern War (1991-present)- In this list, I include Operation Desert Storm (1991) with current invasion and occupation of Iraq (2003- present) since I see Desert Storm as a prelude, rather than a conflict distinct in itself.  I also bunch together operations in the Balkans (mid-late 1990s), Afghanistan (2001- present), Libya, Pakistan, Somalia, on 'n on 'n on.... Some say we're fighting terrorism.  Others feel we're being colonists and nation builders to serve our geo-political and varied corporate interests.

American soldiers throughout history have generally speaking, been very moral and honorable men and women. And this posting was not meant to disparage them,  There's always exceptions who do not represent the military in its entirety but overall US soldiers over history have conducted themselves admirably.

But in terms of US government policy specifically, the causes and justifications to go to war, and military involvement with adversaries domestic and abroad, America has a very poor historical track record.  And even when we fight in wars with moralistic aims and goals,  it always seems to take a backseat to the economic interests of special interests and financiers.
Posted by dsasR at 10:00 AM