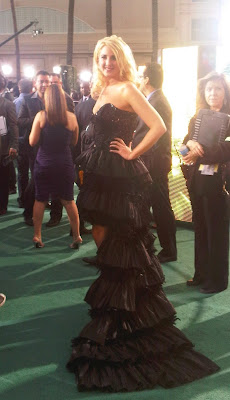 The daughter of King Constantine II of Greece and Queen Anne-Marie of Denmark, HRH Princess Theodora has been the highlight of worldwide entertainment news these past two weeks, following the announcement of her addition as a recurring character on globally broadcast American soap opera, The Bold and The Beautiful (Belleza y Poder), where she will play a recurring character of Alison, a personal secretary to publishing baddie Bill Spencer (Don Diamont).

Currently, Princess Theodora may be seen in the Neil LaBute play, “AutoBahn” at the Renegade Theatre in Los Angeles, which runs to November 20, 2011.

“I am truly honored to have been invited to attend the Latin Grammys – the Latin culture and people have a very special place in my heart – they are passionate, warm, colorful and caring, much like the people in Greece.  Filming in Mexico was a wonderful experience and I hope to visit and maybe even film, in many other countries soon. I am practicing my Spanish to ensure I am ready!”
HRH Princess Theodora of Greece and Denmark
HRH Princess Theodora will be wearing a couture gown by Latin designer, Glaudi by Johana Hernandez.