Well its Friday night/early Saturday morning and all the roaches, rodents and riff-raff, i.e. investors and traders are happy because the Dow ended the week on an upnote.  And while they're all sleepy snug in their satin sheets, dreaming of more profit to be made on Monday, let's look at some new headlines with commentary provided by us:

Stocks surge as Italy, Greece allay debt fears (AP)  Supposedly stocks soared because Italy passed some 'key' economic reforms the EU insisted on.  Normal people would call it austerity.   And we know what austerity means- its a polite way of saying higher taxes, less benefits and social services, higher unemployment and reduction in pensions for the Italian people.  Yes, quite a 'good' thing...

Fed to conduct 4th round of bank stress tests (AP)  These tests are to see if they can withstand a recession. Now you'd think if any bank was to fail the test, the bank would be taken out of circulation and not be allowed to continue being in operation.  Nope.  It means the Fed, i.e.  the US taxpayers are to recapitalize any and all banks that fail the test.  Remember the pecking order: Investors (Royalty).. Banks.. Corporations..  Politicians.. People/peons.

Oil price flirts with $100 per barrel (AP)  We say it again n' again n' again...  The better the market, and the more $$ that investors/traders make, the higher the price of oil and the weaker the US dollar, thus the more $$ you spend to fill your tank and every other basic essential in your life.  If you know what's best for you folks, you will be wishing and hoping and praying for the stock market to crash... and hard.  Its the Only way to deplete the financial reserves of the traders who manipulate the market and by extension basic commodities like oil and utilities.   So pray often.

SEC disciplines 8 employees over Madoff failure (AP)   And still.. Three years later.. the SEC does not discipline anyone from Goldman Sachs, JP Morgan/Chase, Citigroup, Bank of America, AIG, etc...  You know in a way Madoff got a bum rap-- unlike these other entities, Bernie did not hurt the everyday person; those working and scraping to get by.  Instead he fucked over wealthy, affluent people who could have lived quite comfortably for many lifetimes if they didn't feel the need to invest and expand their profits.  So really Madoff did what many wish we could do.. deprive the wealthy of wealth. 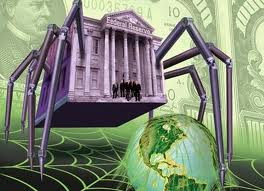 ~  I'll end with an interesting fact I heard and researched for confirmation:  In the entire world, there are only three nations not controlled by the global banking system i.e. cartel--  North Korea, Iran and Cuba.  There used to be four nations until recently when NATO forces intervened in Libya, with banks establishing a line of credit and loans to the rebels while NATO/US thugs assassinated Gadhafi to finish the power transfer.

Just seemed ironic to me that the three most politically oppressive nations are free of global banking oppression, while the rest of the free world are nothing more than debt slaves from the time we sign our first student loan till the time we die of old age..

Definitely something to ponder...
Posted by dsasR at 11:16 PM