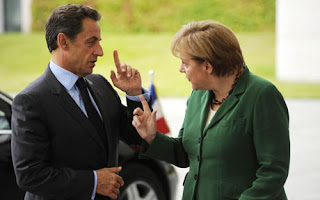 Sarkozy:  I won't shake your hand for I am wonderful and your equal
Merkel:  You most certainly are not either
Sarkozy:  Well, um.. I will think it anyways...

Well the American cockroach investors and floor traders found ways to profit off of the nothingness which was the EU summit, pushing the Dow 186 pts or something or another..

Roaches always do as Roaches do-- turn trash into a meal...

Supposedly the gain was due to "European Union leaders agreeing on a plan to toughen the region's budget rules to help restore market confidence after a two-year sovereign debt crisis." (AP), which is really a lot of double-talk nonsense since as last week demonstrated, if the euro survives it will be more to do with how many Billions or Trillions of dollars the US wishes to give it openly and backdoor to prop the dead currency, than anything Europe does.

In addition, it wasn't 'All' of Europe's leaders who agreed to basically give up some of their national sovereignty and be exposed to years and years of austerity to generate the necessary money to bail out Europe's banks and protect global investors from being exposed to risk

Seems Britain didn't want any part of this deal, along with three other nations.   Germany and France had said all along, that the success of the summit would be based on full unanimity of support amongst its 27 members.  So what to do? 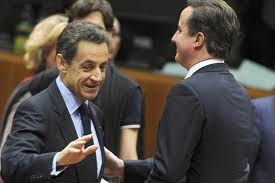 Sarkozy: I will not shake your hand- I am Wonderful and Superior to you!
Cameron:  That is fine, but you are neither
Sarkozy:  Well, um, I will continue to think it...

Well, if you're Germany and France, you basically ratify the treaty anyways, with only 23 members agreeing, still declare the summit a success so deeply soulless morons called "Investors" will be calmed, and look for every way possible to make Britain suffer economically for daring to go against their will.

Yes, those European politicians were sure miffed at Prime Minister David Cameron.. One German politician said "Cameron is a coward" though really if you think about it, it was quite Brave and Gutsy and Courageous to stand up to the rest of the EU like he did.  Another politician said of Britain, "It was a mistake to admit the British into the European Union".  Hmm, a bit 'sour grapes' isn't it.  Kinda like having a popular election and regretting all dissenting voters were allowed to possess citizenship.

But its not all glummy glummess and malicious spite aimed at the PM.  Some comments from British politicians and political bloggers in support of the move include "At Last!" and "To most Tory euroskeptics, Cameron is Churchillian this morning."

We at A&G do not pretend to be Experts on the European Union and the financial complexities of merging 27 nations with 27 different constitutions, governing bodies and various levels of prosperity under one common currency.  We do know the attempt and failure to create a common currency happened before in history-- it was called the Articles of Confederation, the precursor of the formation of the Constitution, and the Articles worked out disastrously.

We also know the way the EU does business is corrupt to the core.   When nations suffocated by more debtload than they can ever pay off wish to leave, instead IMF loans are forced upon them, which increases the financial burden execrably.   Then the EU along with their banking buddies force harsh austerity upon the various nations in financial hardship, then privatization where a nation's infrastructure is bid on and purchased up by corporations and other nations, thus controlling a weak nation's ability to acquire taxes and dissolving a nation's autonomy from within. 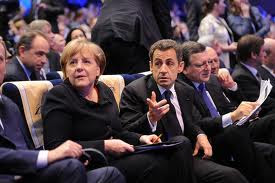 ~ "It seems the only thing we can agree on was invading Libya, murdering Gadhafi and stealing their gold and oil supplies... Oh life was simpler back then..."

And God help a nation that seeks to put an economic package to a public referendum or allow the populace to have any say over their affairs!  When Greece's PM at the time stated his desire for the Greek people to have a say, Merkel of Germany & Sarkozy of France wanted to tear him to pieces, which they did verbally 2 days later and eventually Papandreaou rescinded the vote like a coward.

One of my favorite columnists to read is Ambrose Evans-Pritchard of the Telegraph.UK.   I thought I'd share some of his thoughts as to what happened over the course of this summit and what if anything to take out of it:

"What remarkable petulance and stupidity.  The leaders of France and Germany have more or less bulldozed Britain out of the European Union for the sake of a treaty that offers absolutely no solution to the crisis at hand, or indeed any future crisis. It is EU institutional chair shuffling at its worst, with venom for good measure... it looks as if the EU may soon be reduced to a shell, with a new union forming among the core..." 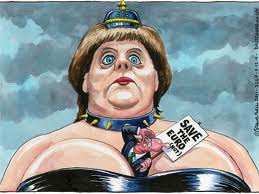 ~ All hail, the Fourth Reich

"Did France and Germany really have to cause this rift by throwing in an assault on the City (of London) that has precious little do with the EMU crisis? Yes, I suppose they did. Given that Merkozy cannot bring themselves to accept that Europe's debacle stems from the euro itself, from a 30% currency misalignment between from North and South, and from an over-leveraged €23 trillion banking bubble that German, French, Dutch, Belgian regulators allowed to happen… given that, yes, I suppose they have to find a scapegoat. They have to whip up a witchhunt against somebody, so why not Anglo-Saxon bankers?...


"The whole purpose of monetary union for Paris was to tie down a reunited Germany with silken cords. France now finds its own hands tied because of EMU, reduced to a humiliating side-kick... As for Britain, let us seize the moment of liberation, and enjoy it."

To repeat-- absolutely nothing of consequence happened at this EU summit that should have given the markets any cheer or joy.  But money junkies Must keep making money every trading day so through rumor and innuendo, transform any piece of nothing into a buying opportunity.

The biggest event of the summit was that Britain stood up to Bullies and Buffoons.  Now hopefully cooler heads can prevail before the child-like spite games of economic punishments do not lead Europe to the kind of frictions the early-mid 20th century experienced. 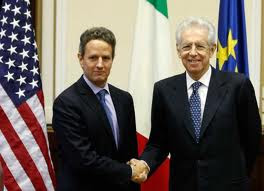 Geither:  I know, I have no business being at an EU Summit but my President wants to get re-elected Desperately and we won't let these silly Europeans derail the global economy
Posted by dsasR at 3:16 PM