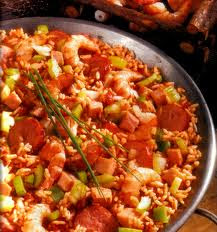 On one hand it wants as bad a July jobs report as possible to be the final 'nudge' to the QE3 officially rolling in September...  Then again it celebrates what appears on the surface... Repeat: on the surface, as positive numbers, with a +235pt spike as of 1pm...

We figure there's three reasons for this:

1)  Between today and the next Fed statement in mid September will be August's jobs report so the results of today really have no immediate importance.

You better believe though the market will not be at 13,100 if it wants to justify QE

2)  After losses in four straight days, the rats and roach Investors were not going to make it five in a row... today was another 'follow the leader' day and like a group of clueless Texas Hold 'Em players sitting at a table, everyone goes all-in.

3)  The specifics of the jobs report should genuinely make Wall St and corporate America happy, which in turn should make you utterly sick to your stomach if you care about anyone beyond yourself.. 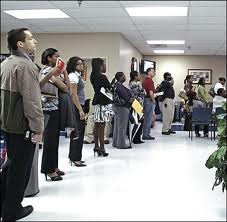 OK, first the "good" news -- Data showed employers hired more workers than expected in July.  The 'experts' predicted' 100,000 new hires and got 163,000 additions to the work force instead.

Let's put aside the fact, those jobs numbers are still utterly anemic in a nation that needs 225,000 new jobs a month created to keep pace with population.

Let's also put aside how easy it is to manipulate expectations (For example, if you are told you will be getting a $1 check in the mail and you get $5, you're ecstatic.  If you were expecting $20 and receive $5, you're pissed...   Same $5 check)

Here's how the jobs creation numbers break down:

But wait a minute?  How can those figures be celebrated when June's figures which were better than July's made people feel so sick inside?

And how did they come up with that month to month discrepancy?

Simple-- they simply 'tweaked' the numbers by adding 377k new jobs out of thin air based on their yearly birth/death adjustments which occur every July.  And from that, you get a +235pt market rise instead of a -235pt drop.

To give some perspective, guess how many much the BLS tweaked its birth/death adjustments in July 2011?    Only 5k.   That means an increase in tweaking by 600%  year to year.

OK so there's that manipulation..

Then you look at the breakdown of the numbers-- Take the more accurate job creation figures for July which was 132,900 jobs created.

How many were part-time?   31,000.  That comes to 23.3% or over 1 out of 5 new jobs created being part-time work which means a reduced salary, reduced hours working and no benefits.

For corporate America, that's wonderful because every dollar saved on an employee's salary or benefits is one more dollar to invest in the market, expansion overseas or to pay a CEO.

The BLS bases its numbers on a survey of 1% of US Fortune 500 Corporations when compiling its data. It does not take the time to go into mainstream America and poll small to medium sized businesses.

There's a good reason why-  its monthly reports are really only geared to corporations, investors and by extension, politicians.   Average Americans only bother to follow the numbers when times are bad and even then, as in now, get confused by what the true unemployment picture looks like. 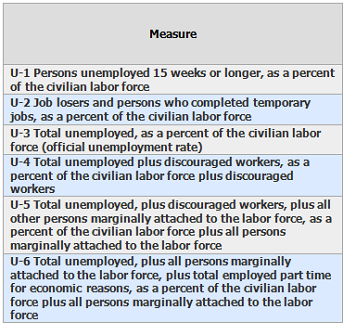 Since the Clinton Administration, the BLS ignores the U-6 in its compiling of its unemployment reports.  It measures only those who are out of a job and currently looking for work. It does not count discouraged potential employees who have quit looking, nor those who are underemployed — wanting to work full-time but forced to work part-time.

For that count, the government releases a separate number called the "U-6" which provides a more complete tally of how many people really are out of work.

According to CNBC, Nevada's U-6 rate is 22.1 percent, up from just 7.6 percent in 2007.  Over one out of every five people who live in Nevada are without work.   Economically troubled California has a 20.3 percent real rate, while Rhode Island is at 18.3 percent, more than double its 8.3 percent rate in 2007.

As for some of the Election 2012 'battleground' states, Florida's unemployment rate is 17 percent, with Pennsylvania and Ohio both around 14 percent.  That comes out to generally-speaking 1 out of every 7 or 8 people jobless. And think about this-- out of 50 US states, 47 have true unemployment over 10%   Only three states — Nebraska (9.1 percent), South Dakota (8.Publish Post6 percent) and North Dakota (6.1 percent) are below 10%, according to research from RBC Capital Markets.

So the stock market and investors and the media may celebrate today's news,  there's no reason you should be...  Its all mumbo-jumbo
Posted by dsasR at 11:00 AM