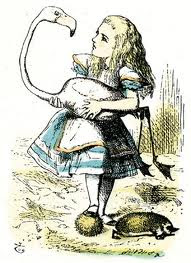 When most of us were young, at one time or another, we were forced to read "Alice in Wonderland", and even if some of us weren't, simply by watching the Disney cartoon or 100 other variances, you got the gist of some of the absurdities..
The world Alice discovered was a nonsensical world where black was white and white was black; a world where reactions and responses were complete opposite to how one would normally expect.  And as for a child reading the book or watching the film, this seemed funny in some way.
In truth, all the characters in "Alice in Wonderland" save for Alice herself were utterly wretched, horrid creatures; sarcastic, rude and arrogant no-nothings deserving of sharp back-handed slaps to their heads.
When glancing at the news of this past week and how the market has responded, the correlation seemed apt, though people who make their living in banking and finance deserve far worse than conks to their collective noggins. 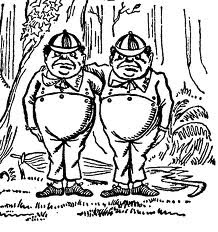 ~ Caricature of Presidents Bush & Obama.. But, which one is which??
For instance, today GDP figures for the first quarter of 2012 came in at +2.2%.  The "experts" predicted +2.5% and 4Q 2011 figures were at +3.0%.
That is bad.. not UK bad but still.. its bad.
Markets should have fallen right?  Especially when figures for Initial Job Claims keep rising for three consecutive weeks.  This week the figure is at 380,000.  A rise in claims is often mispresented as a slowdown in hiring. It is, instead, a pick-up in firing because these are people who had gainful employment a week or two prior.
Well when Amazon's profits increase 16% this quarter, that's good enough news to cockroach investors to ignore all the reality of the economy and push the Dow and profits higher.

The stock market also loves news like this from WSJ:

"Companies like Wal-Mart Stores Inc.,  International Paper Co., Honeywell International Inc. and United Parcel Service Inc., boosted their employment at home by 3.1%, or 113,000 jobs, between 2009 and 2011, the same rate of increase as the nation's other employers. But they also added more than 333,000 jobs in their far-flung—and faster-growing— foreign operations."

And while you may shrug and say "Who cares.. everyone knows the market is not reality", the truth is you are simply assuming.  There are millions upon millions of people who are deeply ignorant to finance and who base the success of the economy (and how they vote in elections) solely on what the Dow is at. 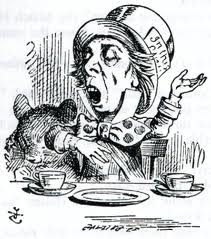 ~ 'Buy! I say.. Always Buy!  Unless you sell.. then certainly Sell! Or Buy..'
Like we stated in a previous posting, a person standing in a food line who is hungry, cold and desperate needs to believe the line is moving.  Those who set up the line know that, so they do every trick and scheme to make it appear like there's movement when there's not.   The person at the back has no clue of this deceit and frankly doesn't want to; its that hope or illusion that keeps him/her going.
So you have in this post-2008 Lehman world, a global political apparatus that caters to a financial sector which is able then to completely block & blot out economic reality for the world around them because for financial sector, there is no "line" to wait to be fed by the Fed.
Whether it be a corporation or individual, those who are in from the cold don't tend to think about those who are outside.
As much as "Alice in Wonderland" is a terrible book filled with most unlikable characters, there was one part that was always a most appealing read; something which in a perfect world, you'd see presently on Wall St...
Something to do with "Off with their heads!"
Now, do we mean this figuratively or literally? 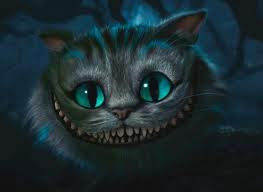