The psychological reason for the recession 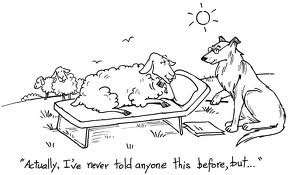 ~ When the sheep falls for the wolf...

A lot of people are asking how we got to where we are.  And a lot of so-called 'experts' particularly in the world of finance, economics and investing have come up with a multitude of reasons.  And rather than list each one and debate and counterpoint, the gist is like this.. The cause for the current never-ending recession is Bush (or Obama), Republicans (or Democrats) we've spent to much (or not spent enough) and we should be investing in A and B (or C and D or E...)  Always someone blaming someone.

Truth is ultimately no one has a clue and when they spout their mouths off, its with a political or economic agenda attached.  Very few speak honest and unbiased.. except us.   A&G is not invested in the market and there's no financial benefit we receive when it goes up or down.  We're also not gold/silver peddlers so if you wish to buy the precious metals or not, up to you.. we don't push or profit either way.

As for political motivations, we honestly don't care if you support the President 100% or want him to be a one-termer.  We see no real improvement in the US economy no matter who is elected.  We just tend to be a bit more critical on Obama than perhaps we would a Republican because we tend to expect different things from each party.

For instance, 96% of black Americans voted for Obama in 2008 and he's done Absolutely Nothing to make their lives better.  Zero. Their unemployment rate continues to hover around 16% officially and the recession is hitting them extra hard..   To paraphrase Kanye West, if a Republican was President, we would not expect him/her to care about black people and their needs. When the current President, a black Democrat, is doing the ignoring, it has to be called out. 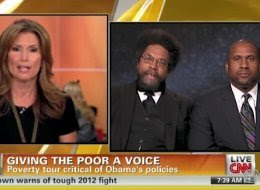 So now that we've laid our agenda 'cards' on the table, we're going to try to give a reason why the nation is in an ongoing recession-  Basically its this..  some people feel that have the right to make unlimited amounts of money and most of the masses show agreement by standing by and watching in admiration.

In other words, we're all to blame for the recession but not economically so.  Rather its psychological.  We as Americans are indoctrinated to believe bigger is better.  The larger and more profitable the corporation, the more we are to admire and pay homage to it.  And the CEO's who run it have to be better and more intelligent than us, don't they?  But why?  Because they're so wealthy and successful and live lives we can only dream.. yachts.. helicopters.. private planes.. opulence galore.  When America's economy is boisterous and all-consuming, we seem feel it in our lives and live it by extension, even if our lives are really constant struggle amid incremental pay and constant triviality based tension.

This is sincerely why celebrities and athletes you may like and admire, get millions to do commericals.  Because subconsciously we are supposed to feel like we're as affluent and attractive because we eat a certain yogurt or wear clothing with a swoosh.

Now.. to honestly address this topic, 9/11 has to be spoken about.

On 9/11, America was attacked and we were all in shock & deeply mourned- but why?  Loss of life? Oh absolutely.. needless pain and suffering on innocents.  Also, the surprise of it all.. we were attacked in what felt without provocation and it was sudden and unexpected, etc.. So yes that too would definitely would cause grieving and emotional turbulence for quite a period of time.  But let's get beyond that though-- as yourselves.. why did we as Americans mourn?  There's a third reason...

America mourned because the twin towers fell.   And in truth, if zero lives were lost and they fell, Americans still would have deeply grieved.  And it has to be admitted that if Fargo ND or Columbia, SC had been attacked instead, with the same number of lives needlessly taken, that America would have grieved but moved on quickly.  Americans had some specific connection to the two towers.. but what?

They strangely came to symbolize America in ways they shouldn't have; surpassing more proper symbols of the greatness of America, such as the Statue of Liberty and Independence Hall.  The towers came to represent America ruling the world as financial superpower and by extension that vibrant, and Highly-profitable corporations meant the nation was Strong. 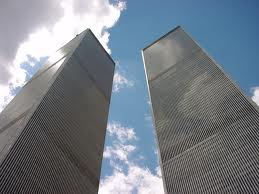 And so, because of this mindset of the Greatness of corporation, the masses have willingly accepted its government taking their collective wealth, i.e. tax revenue and giving it to those corporations so they may thrive even at the expense of the populace.  There is no serious stink made when a corporation gets special  privileges on tax rates or low interest on loans.  In fact when it was announced that General Electric paid Zero taxes last year, the public shrugged.

We give corporations a free pass.  And deep down, we find a perverse pride in "Too Big to Fail" because it implies in many that America is too big to fail as well, thus ultimately all will be OK.  When Wall St. rises, we're conditioned that this is a great thing and symbolizes economic vitality even though in reality their wealth does not even remotely trickle back down to the masses.  And when we see the markets drop based on their insatiable greed and avarice,  the American people actually demand the Fed or Treasury do something to prop the markets back up to reward the guilty.

America is in love with its captors.  It's called Stockholm Syndrome.  And this is why the recession occurred-  Wall St. rose dramatically based on the credit bubble- few said a peep.. just as long as the Dow was rising.  Home prices spiking upwards in unrealistic and cartoonish speed- no one questioned it.  Instead many decided to become house flippers themselves and help push the home prices even artificially higher.  And we admire and respect wealthy people-- Buffett, Trump, Gates.. We gobble up all the "Get Rich!" books off the shelves..  And on & on..

So right now the entity that caused the destruction of the US economy-- Wall St.. gets first dibs on the economic resources of the nation's treasury.  And the President and Congress all seem to find common ground on the issue of doing anything and everything humanly possible to calm markets and make investors feel secure.  And thus we're sabotaging our nation for the good of soulless, sociopathic investors and corporations. 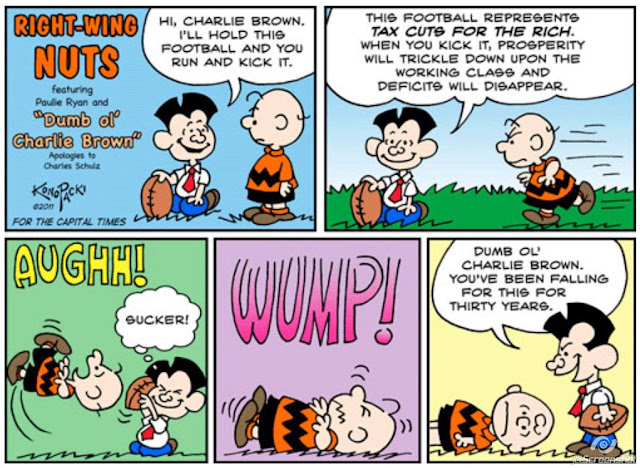 Any possibility of a real recovery for this nation will only occur when the collective mindset of Americans change, and we stop looking at Wall St. as heros and CEO's as brilliant people to admire and respect.  The need to make unlimited amounts of money is not to be admired and people need to start demanding the very wealthy pay more taxes, and stop hiding behind stale Reganisms of 'trickle down'.  From there, the focus can change from bailing out the wealthy to rebuilding a crumbling middle class, and already decimated poor class.  Those people represent Real America-  not the ultra well-to-do.