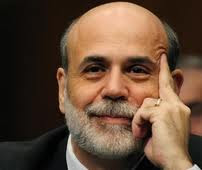 Last week, Republican Presidential hopeful Rick Perry alluded to Fed Chair Ben Bernanke as treasonous.  This seemed to cause a big stink in the corporate controlled main-stream news.  If most people understood the Fed Reserve and its power and dominion, they would have understood Perry's remarks and nodded in agreement.

Bernanke is the man personally responsible for the deterioration of the value of the US dollar and the artificially inflated stock market. And he has the power to create $ out of thin air to use and give to whomever he wishes at a moment's notice for any reason he desires. 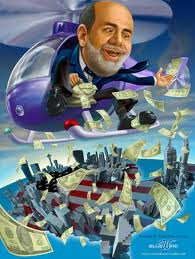 Personally I do not support Perry overall as a candidate, but on this issue, he's 100% on the mark because only an evil, treasonous snake like Bernanke would do something like this:

Wall Street Aristocracy Got $1.2T in Loans (Bloomberg) -- "Citigroup Inc. and Bank of America Corp. were the reigning champions of finance in 2006 as home prices peaked, leading the 10 biggest U.S. banks and brokerage firms to their best year ever with $104 billion of profits.

By 2008, the housing market’s collapse forced those companies to take more than six times as much, $669 billion, in emergency loans from the U.S. Federal Reserve. The loans dwarfed the $160 billion in public bailouts the top 10 got from the U.S. Treasury, yet until now the full amounts have remained secret.

Fed Chairman Ben S. Bernanke’s unprecedented effort to keep the economy from plunging into depression included lending banks and other companies as much as $1.2 trillion of public money, about the same amount U.S. homeowners currently owe on 6.5 million delinquent and foreclosed mortgages. The largest borrower, Morgan Stanley (MS), got as much as $107.3 billion, while Citigroup took $99.5 billion and Bank of America $91.4 billion.."

~ I would strongly argue the assumption that Bastard Ben saved us from a Depression.  At best he delayed it, while increasing the overall National Debt by $3 TRILLION dollars:  The $1.2T + $1.75T spent via QE 1 & 2.

Every Single Dollar spent by Bastard Ben to give to these elite corporations that Americans are indoctrinated into believing represents US economic strength & prosperity, will need to be repaid over time by All of us, our children and grandchildren at accelerated interest.

"It wasn’t just American finance. Almost half of the Fed’s top 30 borrowers, measured by peak balances, were European firms. They included Edinburgh-based Royal Bank of Scotland Plc, which took $84.5 billion, the most of any non-U.S. lender, and Zurich-based UBS SA which got $77.2 billion. Germany’s Hypo Real Estate Holding AG borrowed $28.7 billion, an average of $21 million for each of its 1,366 employees.  The largest borrowers also included Dexia SA, Belgium’s biggest bank by assets, and Societe Generale SA, based in Paris, whose bond-insurance prices have surged in the past month as investors speculated that the spreading sovereign debt crisis in Europe might increase their chances of default."

Yes.. US Treasury.. your blood money was used to give to European banks.

And your money is Gone.  And your quality of life is now Less than before.

You can love or hate the President, or a particular member of the Cabinet, or love or hate Congress or a particular member of it, but the truth is they are not the biggest reason for the economic downfall of the nation..  It all starts with the Federal Reserve and someone most people don't even have a clue about because he's not elected and is so quiet, mild mannered and unassuming.

But the destruction of the US economy begins and ends with one man... 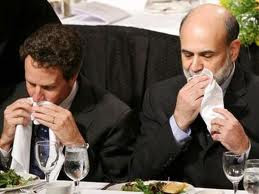 Ever notice how Everyone in politics, the corporate-controlled media and world of finance, banking and investment was quick to declare "Recovery!!" two years ago and beat that Drum so G-d Damned incessantly in millions of daily news articles, speeches and soundbites...

Notice how all those same rotten entities are so passionately determined not to acknowledge in any way, shape or form that the economy is collapsing into a double dip recession?

Made me think back to former President Bush.  The US was in an "official" recession back in 2007 and he Absolutely Refused to admit or acknowledge it until.. Gasp~  October 2008 when the original $700B TARP bill was introduced to Congress and thus admittance of recession was a necessary step to put fear of God into Americans to support it.

Funny the things one recalls while reflecting on an endless cavalcade of lying liars. 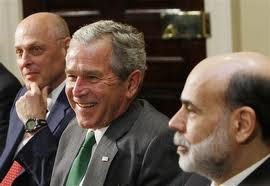