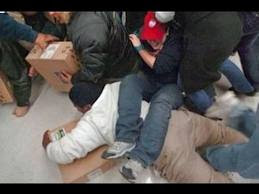 Well we're back after a long weekend... lets just delve in..

Holiday shopping season off to record start -- "It's estimated that U.S. shoppers hit stores and websites at record numbers over the Thanksgiving weekend, according to a survey released by the National Retail Federation on Sunday...

All told, a record 247 million shoppers visited stores and websites over the four-day weekend starting on Thanksgiving, up 9.2 percent of last year, according to a survey of 4,000 shoppers that was conducted by research firm BIGinsight for the trade group. Americans spent more too: The average holiday shopper spent $423 over the entire weekend, up from $398. Total spending over the four-day weekend totaled $59.1 billion, up 12.8 percent from 2011." 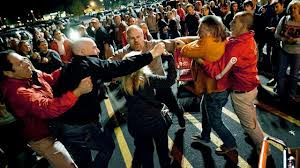 Black Friday actually saw sales Drop by nearly 2% compared to 2011. This occurred despite a 3.5% increase in retail foot traffic and a 1% increase in US population compared to last year  (source: ShopperTrak)

But let's say for argument sake, AP is correct...  where did all these people get the money to purchase items from?     The national savings rate is 3.3% -- the lowest its been in Three years, and average hourly wages have risen at the lowest pace since the recession really took off in late 2008.

And its funny how no one who artificially inflates the exuberance of Black Friday as akin to a National Event ever takes into consideration that 'R' word... 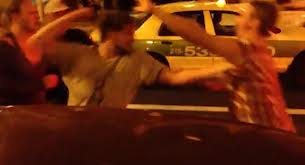 And speaking of which, did you know it is more difficult, and more importantly,  more privacy invasive now then Ever before when it comes to making returns on purchases?

From CBS 5- San Francisco:  "When you make a return this holiday season you may have to hand over more than just your receipt, as retailers try to prevent repeated returns.

“I was required to provide them a copy of my driver’s license, where they actually took the information and scanned it into their database,” said a shopper who asked to be identified only as Leslie.

According to the National Retail Federation, 62 percent of retailers have ID requirements. Among those who have similar policies for returns are The Finish Line, Home Depot, Target and more. So where does your information go? Likely it’s being stored on The Retail Equation, a service which tracks how often you bring stuff back" 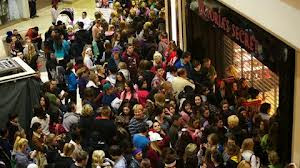 Sure glad there's no such thing as 'Big Brother'... Wheww~

So why doesn't the news media ever cover Black Friday honestly?

Well, how do you think they make their money?  Yes-- advertising.  And who is spending the bulk of advertiser dollars on TV and newspaper ads during this time of year?   Yes-- the very same companies that the writers brag upon as thriving, bustling stores.  And what would happen if the media portrayed Black Friday as a negative, or gave information that dissuaded people from shopping?  Yes-- less ads.

'You caress my mumblies... I caress your jumblies'

So many suckers and fools kill themselves (and sometimes others) to get a good 'deal' when quite often the best deals are anytime But the day after Thanksgiving: 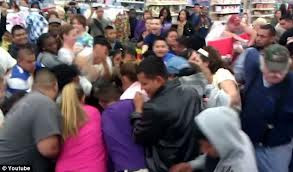 From WSJ:   "After crunching two to six years' worth of pricing data for a number of typical holiday gifts, The Wall Street Journal has turned up the best times to go deal hunting — and they almost never involve standing in the freezing cold all night.

It turns out that gifts from Barbie dolls to watches to blenders are often priced below Black Friday levels at various times throughout the year, even during the holiday season, and their prices follow different trajectories as the remaining shopping days tick down.

Watches and jewelry, typical last-minute quarry for well-heeled shoppers, get more expensive as the season progresses, according to Decide Inc., the consumer-price research firm that gathered and analyzed the data for this article. Blenders, which might sit around for months if they aren't bought in the holiday window, get much cheaper at the end..."

As for HDTV's, they're Always discounted the cheapest right before the Super Bowl, um.. we mean.. 'Big Game'.. Nudge.. Wink..  (That's our little homage to all the retailers who advertise before the Super Bowl but don't want to pay licensing fees for the right to use that term, so they "cleverly" refer to it as 'Big Game') 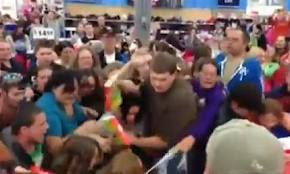 And remember what we wrote in our last posting... many, many stores offered Black Friday 'sales' and promotions which were Exactly the same ones as offered other times of the year (Macy's, Yankee Candle, Modell's, etc..) and some offering the Exact same sales as offered the other 51 weeks of the year (CVS, Kohls, etc..)
But we don't want to end this post on a downer so we'll share what was probably the Best and Only genuinely good deal out there on Friday and it took place at all places, Office Max--
A $50 iTunes Gift card could be purchased for $35 i.e. a 30% off savings without any requirement to buy other things or receiving store 'bonus bucks' like some of the pharmacies like CVS and Rite Aid do.

Honestly, it was the first time we've Ever seen iTunes cards sold anywhere for better than $20% off.

To give comparison, Target was selling a $60 pack of iTunes cards for $50 which comes to a savings of 18%.  Rite Aid was selling at $25 card for $25 but you get $5 back to use to buy other things at the store, which really isn't much of a savings at all.. And they limited purchases to 1 per customer. 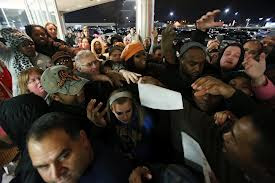 There was no limit on purchases at OfficeMax so one could have bought 50 cards for themselves, for gifts to others and/or to re-sell at a 'discount' via eBay and other outlets, and still make a little profit.  And there was No line because few to none knew about it.  We quietly walked in mid-day.. bought some and didn't even wait in line to do so..
So a big Yay! to OfficeMax for having the only True sale for Friday, and let no one say our posts always end on a down note
Posted by dsasR at 6:28 PM