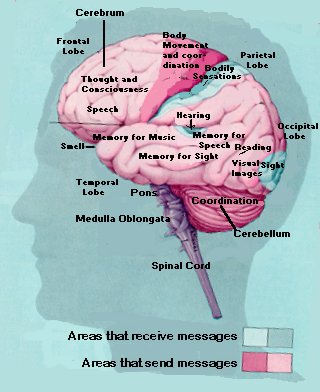 The uniquely human abilities to build relationships with others, talk, and even gossip are all boons of a large brain, a new study says.

Researchers who put human toddlers and great apes through a series of physical and cognitive tests found that human social skills are superior to those of our closest genetic relatives, whose brains are smaller.

But whether we are better at putting our social skills to good use is still a matter of opinion.
"Compared [with] baboons we waste an awful lot of time gossiping about one another," said Joan Silk, an anthropologist at the University of California, Los Angeles, who was not involved in the study.

Esther Herrmann of the Max Planck Institute for Evolutionary Anthropology in Leipzig, Germany, and colleagues put 106 chimpanzees, 32 orangutans, and 105 young German children through a series of complex tests.

The children were all about two-and-a-half years old and had been speaking for at least a year.
The apes had all been made accustomed to humans.

The researchers designed 16 different puzzles to tease out the differences in ability between humans and apes.

Some of the puzzles, such as tracking the position of a reward under a cup, involved only physical skills. Others, such as selecting the cup that the researcher pointed to, involved social skills such as communication.

The results found that chimpanzees, orangutans, and human children were all equally successful in the physical skills tests.

But the human children were significantly better at the social skills tests—scoring around 74 percent correct on the tests compared to scores of 33 percent from both groups of apes. (Related news: "Monkeys Deaf to Complex Communication, Study Says" [January 22, 2004].)

For instance, the toddlers outperformed the apes on "theory of mind" experiments—the ability to understand that other individuals have their own beliefs and intentions.

There are two main theories as to why humans have evolved larger brains than their primate relatives. A huge brain is a serious investment— neural tissue guzzles a lot of energy.

The general intelligence hypothesis suggests that humans' bigger brains make us better and faster at all kinds of skills, such as memorizing, learning, and planning ahead.

The cultural intelligence hypothesis, bolstered by this recent study, says that bigger brains have specifically enabled us to develop more complex social skills.

"This [study] contradicts the general intelligence hypothesis," Herrmann said. "We would have expected to see a difference in physical skills as well if [that] hypothesis was right."

Aside from gossiping, these increased social skills appear to carry strong advantages, enabling humans to sustain relationships with others and help each other out in times of need.

"Our bigger brains enable us to cope with the complexities of social life," said Robin Dunbar, an evolutionary psychologist at the University of Liverpool in the United Kingdom who was not involved in the study.

No one really knows when or why humans started to develop these enhanced social skills, but there are one or two clues.

"It must have occurred later than one million years ago, as we don't see any increase in brain size before then," lead study author Herrmann said.

One theory is that social skills evolved in response to a more nomadic lifestyle, possibly dating back to when human ancestors began to migrate out of Africa.

"As people began to migrate more they needed to create good relationships with a wider range of people, so that they could beg favors over things like water, food, and access," the University of Liverpool's Dunbar said.

In particular language appears to have been a key development, enabling humans to communicate with others outside of their tribal groups.

However, humans don't have a complete monopoly on social skills.
A related study published in Science today shows that primates are capable of reading emotions and understanding the intentions of others.

Harvard University's Justin Wood and colleagues tested the ability of cotton-top tamarins, rhesus macaques, and chimpanzees to understand the difference between a deliberate gesture and an accidental gesture.

All the primates showed much more interest when Wood deliberately selected a particular container than when his hand fell accidentally onto a container.

"Humans are not the only ones who can guess what others are thinking," Wood said.

For humans these enhanced social skills have enabled us to spread far and wide, settling in every corner of the world.

But this may have come with some hidden costs, said University of California's Silk.

"The human brain is a really complicated machine that goes wrong with some frequency," Silk said.
"
Mental illness may be the evolutionary cost of this complexity."