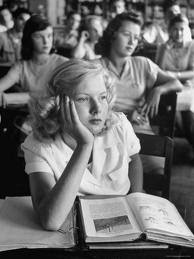 Not sure how the market's doing today.. I think its down.. maybe its up.. does it even matter?  At this point the ups and downs of the stock market is becoming as relevant to everyday life as who wins a Grammy or Tony award.   So instead, I decided to do another list- this one is perhaps not economic in scope but its short and virtually harmless:

Top 5 ways I would change/alter US Presidential elections:

1)  Instead of Iowa, New Hampshire and South Carolina having so much sway as to who a party's candidate will be, instead primaries would be regional.  So for instance, the New England & Mid-Atlantic States would vote in 1 super-primary.  Then 2 weeks later, the entire 'old South' votes, followed by Midwest 2 weeks after that..  The entire nomination process would take 8-10 weeks and pretty much all states would have some say in the outcome.

2)  Since corporations love donating to candidates so much, change the tax laws so each large company or business has $10k-$50k in additional taxes automatically deducted which goes into an overall campaign fund that is dispersed to all parties equally.  This way the corporations can continue being patriotic (since we know thats' why they donate, right?) yet minimize their direct sway on specific candidates.

3)  I'd put the League of Women Voters back in control of Presidential Debates.  After Ross Perot made such a strong showing in 1992 and garnered over 19% of total vote, the corrupt two parties got together, created a new commission that oversees debates and set the bar where you needed 30% popularity to get access to the stage.  If I had the power, this would stop immediately and go back to pre-1992 rules where any relevant third-party Independent could share the debates.

4)  I'd charge a poll tax of 10 cents to vote.  Yes I know that's unconstitutional but this is my list.  Too many people vote who know nothing about the candidates and vote for the most Ignorant of reasons-  a person's last name, their skin color (being different as well as being the same), who seems 'cooler' or 'nicer' and a thousand other truly silly reasons.   Paying 10 cents per person is not a financial hardship to any voting adult, and yet its just enough that it can make the difference as to how serious or committed a voter you are.  Plus if the $ is designated for a good cause like fighting cancer, it is win-win for all.

5)  Provide a 'none of the above' option on the ballot.

You may disagree with me, but its my daydream and to quote the Rolling Stones, "Hey You..Get off of my cloud!"