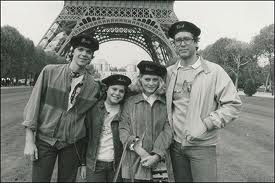 Here's a layperson explanation why the markets dropped today...
Everyone has a credit rating- On an individual level, your credit worthiness is judged by Experian, TransUnion and Equifax.  And they determine based on various computations of income, your personal debt and other factors, whether or not you will be approved or turned down for a credit card, what your interest will be, credit limit and so forth.
Cities/municipalities, states/regions and nations also have credit ratings agencies- they are Standard & Poor's (S&P), Moody's and Fitch's.   Now when poorer nations with high debt ratios get downgraded, investors lick their chops at opportunity to invest at high interest rates of return.  It's no different than an individual holding a credit card- if you miss a payment or your debt to income ratio is too high, you may find your interest rate spike from 10% to 20%   Same thing at play with nations. Investors buy nation's debt and the less likely a nation looks to repay it, the greater the interest they must pay to investors or bondholders in exchange for taking on that risk.
Now you have some very snooty nations with horrible debt/revenue ratios but because they're world powers with prestige and not 3rd world nations, they've been allowed to keep their AAA credit rating much longer.  So long in fact, that even the threat of a downgrade is an insult; like a slap on the face with a glove.  S&P downgraded the US deservedly.  Unlike the other two ratings agencies, they also take political considerations into focus, such as a Congress that refuses to do Anything substantive to address the current debt crisis, including a Refusal of any additional revenue streams (taxes from wealthy) to push down the debtload.
Now.. onto today.  It seems S&P is now challenging France's AAA credit rating.  They're debt/revenue ratio is nearly as horrible as the US.  The French have taken great insult, as if you insulted their wine or language.   Everyone is outraged over there... didn't stop the French market from plunging though.  And since US investors and banks would take a hit, we plunged too.
The financial media is saying this is a GREAT buying opportunity.
Hmm, really??
_____________________

PS..  Forgot to mention.. Housing prices have fallen 2.8% in 2011 2Q (April-June) which is usually the peak time of the tear to buy.. Also it was announced that Fannie Mae which recently got deservedly downgraded as well, now gave Bank America $500million to service mortgages (actually what happened specifically is Fannie absorbed $500 mill. in bad debts off Bank America's balance sheets) Psst.. this is called a backdoor bailout-  happens much more than you think.

Friends.. things are not getting better-  Please do not put your precious $$ at risk.  Even a coffee can is safer than the market.
Posted by dsasR at 2:47 PM