The Power of a Riot 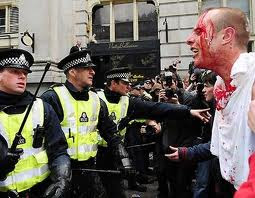 Its quite interesting.. the power of a riot.

I don't speak of the rioters themselves.  They do as they do.. Some with legitimate purpose; others seeking opportunity to loot for loot sake.

No, I mean the power a State or Nation gains in controlling its subjects after a riot takes place.. its quite an extraordinary thing.  Rather than write endless paragraphs to explain what I mean, let's really simplify this..  I am going to ask some questions, some may seem far fetched but nonetheless, answer to yourself Yes or No.

Would you be willing to accept a 7 day-a-week 11p curfew on all your movements outside your home except for sincere hospital type emergencies?

Would you agree to passing through checkpoints in your community and wearing a color coded wrist band, arm band or other insignia to show authorities you were checked?

Would you be willing to answer any question a law enforcement agent asks, no matter how intrusive even before being arrested or charged?

Would you be willing to have a microchip placed painlessly but permanently on your wrist so all your movements, purchases, medical history, etc. could be easily tracked?

Would you support the use of rubber bullets, gas canisters and water hoses to be used whenever a group congregated and authorities felt threatened?

OK.. now..  if there had been a 4-5 day & night riot in your city or state just recently, would you answer any differently if saying 'Yes' meant the chance of another riot would decrease dramatically?

Remember, in the US, if not for 9/11, there'd be no Patriot Act... and Americans lost many basic freedoms when it was passed.  Small example: In the past, if you told someone you were going to kick their butt, it mostly be laughed off.   Now, you're arrested for making a terroristic threat.

Amid all the excitement and passion of the UK riots, many Britoners have been clamoring for excessive get-tough measures to increase the power of the police and how they respond in the future.   Would they still be screaming for the same draconian measures 3 months from now when things calmed, who knows?

Let's just hope for their sake, they Do Not get everything they want.  I don't think Britons would be too happy with their new world